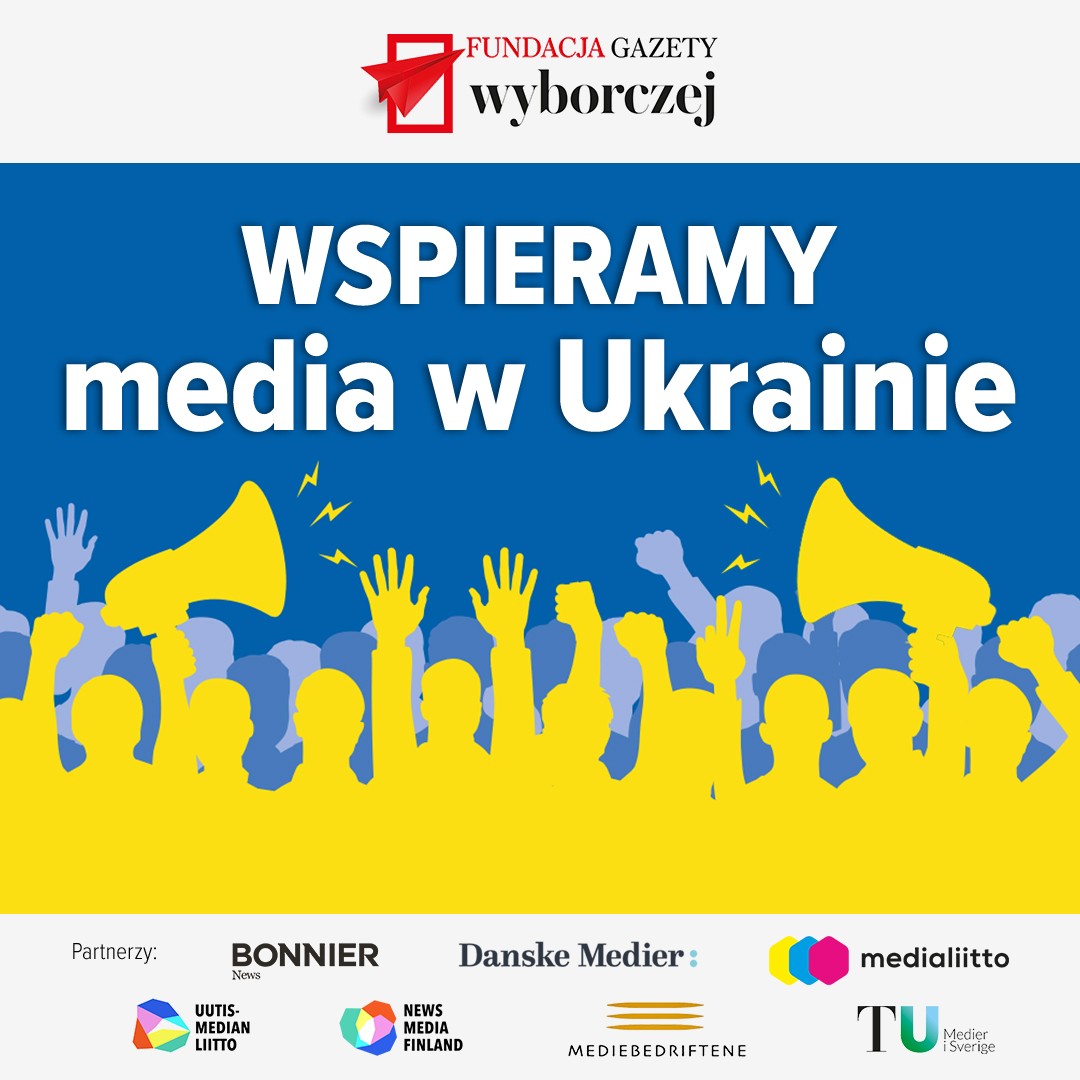 The Gazeta Wyborcza Foundation has joined group of organizations supporting Ukraine. Together with partners, it has established the Ukrainian Media Fund and is fundraising for this purpose, intending to support the international campaign The Fix Media, as well as publishing and journalistic organizations operating directly in the attacked country. Within 5 days, the Gazeta Wyborcza Foundation managed to collect over 150,000 euro - everyone can still make a donation at https://www.fundacjagazetywyborcza.pl/projects/solidarni-z-ukraina/.

The Gazeta Wyborcza Foundation was established to promote media freedom and integrity. It also wants to develop independent journalism throughout nationwide and international activities carried out in cooperation with the largest media in Europe

In the face of Russia’s invasion of Ukraine and the spread of disinformation, the Gazeta Wyborcza Foundation and its partners established a Ukrainian Media Fund dedicated to direct support of journalists and publishers in the war zone.

- The initiative of the Gazeta Wyborcza Foundation was picked up by Peter Wołodarski, a member of the Foundation's Council. Thanks to his contacts, a group of organizations from Scandinavia was formed within 24 hours - all of them expressed their willingness to join our activities and provide financial support. We are currently benefiting from the snowball effect - other organizations and publishers, learning from our partners about the activities undertaken within the framework of the Fund, join our initiative. This is an amazing spurt and an expression of solidarity on the part of our colleagues - says Joanna Krawczyk, president of the Gazeta Wyborcza Foundation, who also manages the Wyborcza Philanthropic Group.

The Gazeta Wyborcza Foundation also collects individual contributions to the Fund - you can support it with a donation at https://www.fundacjagazetywyborcza.pl/projects/solidarni-z-ukraina/
During the first 5 days of the fundraising campaign, the organisers received almost 150,000 euro.

- The collected funds will be used to purchase the equipment necessary for journalists working in war zones, financial support for journalists and media organizations in Ukraine, as well as the relocation of journalists to Poland and other EU countries. For this purpose, we cooperate with the media and organizations on the spot and in other European countries. The first funds have already been transferred, equipment orders are pending - adds Joanna Krawczyk.

The Gazeta Wyborcza Foundation was established by Agora in 2018. Following the New York Times Company and The Guardian Media Group, the publisher of Gazeta Wyborcza created a non-profit organization to develop valuable media projects and pursue important social goals. You can read about the Foundation's current projects at https://www.fundacjagazetywyborczej.pl/en/.