The financial results of the Agora Group in 2Q2020 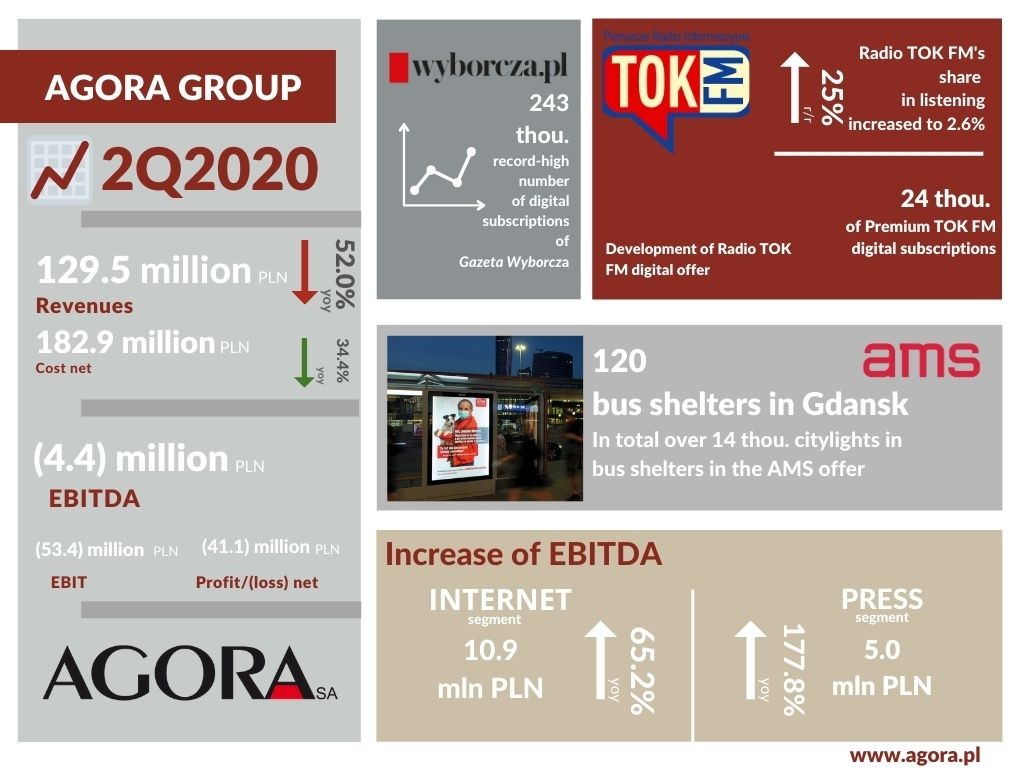 The operating results of the Agora Group in 2Q2020 were unprecedentedly affected by the outbreak of the COVID-19 pandemic. Restrictions introduced to prevent its further spread, related, i.a., to closure of cinemas, limited operations of the sales points and restrictions on the movement of population, had a significant negative impact on the operations and results of most of Group's businesses during this period. However, subsequent months of 2020 bring an improvement in the results of Agora and its brands, especially due to the faster growth of demand for advertising campaigns and return of viewers to the cinemas.

- Our company was hit hard by the pandemic, but I am proud of how Agora's team handled the coronavirus blow. Our media broke popularity records. Now we are rebuilding the advertising business at a good pace, and subsequent film premieres attract more and more viewers to the cinemas.We have successfully completed negotiations with banks and secured financing for Helios and the entire Agora for the coming years. All this allows us to work with greater peace and optimism on Agora's return to its former condition - comments Bartosz Hojka, President of the Management Board of Agora.

Total revenues of the Agora Group in 2Q2020 amounted to PLN 129.5 million and were lower by over 50% yoy. This was due to the outbreak of the COVID-19 pandemic, which had a negative impact on all sources of the Group's revenues except for sales of digital subscriptons of Wyborcza.pl and TOK FM Premium. The largest declines in inflows took place in the businesses most affected by the pandemic - in the Movies and Books as well as the Outdoor segments.
The Agora Group's advertising revenues decreased by almost 48% yoy, mainly due to the negative impact of the pandemic on the advertisers’ activity and the decline in their expenditure on promoting their products and services in Poland in 2Q2020. According to Agora's estimates, the value of the Polish advertising market at that time amounted to ca. PLN 1.9 billion and decreased by 28.5% compared to 2Q2019*. The most significant reduction in advertising budgets was observed in the following segments: the Outdoor, mainly due to restrictions on the movement of the population, and the Radio - due to the shrinking market of radio and cinema advertising, as well as the Press - due to the deepening of the negative trends in press advertising sales. The smallest decrease in advertising revenues was recorded in the Internet segment. As a result of the closure of cinemas in Poland by an administrative decision, from 12 March 2020, the ticket sales in Helios cinemas decreased by 99.7%; no proceeds from concession sales were recorded. The Group's revenues from copy sales declined by 16.7%, mainly due to the reduction in the number of points of sales of both press and book publications. The Agora Group also had lower inflows from printing services and other sales. Only the revenues from the Group's film activity were higher due to the distribution of an increasing number of titles from NEXT FILM portfolio via digital platforms.

In the 2Q2020, net operating costs of the Agora Group decreased by over 34% to PLN 182.9 million. This was mainly due to administrative closure of cinemas and restaurants located in shopping malls, as well as cost discipline in the entire Group. Agora made a decision to optimize its portfolio of investment projects, focusing on ensuring the security of Group's key assets during this difficult time. The level of the Group's operating costs was also influenced by a number of one-off events. Their value was positively affected by: profit from the sale of Plan D (formerly Domiporta) and from the sale of real estate, and negatively by: costs of restructuring in Plan D and GoldenLine, as well as a review of Group's assets, which resulted in asset write-offs in various areas of the Group. The total negative impact of all these events amounted to PLN 4.8 million.

According to the company's Management Board, the largest negative impact of the pandemic on the operations of the Agora Group was visible in the 2Q2020. Therefore, according to Agora's predictions, the rate of decline in the Group's revenues in the next quarters should be lower than in the 2Q2020, provided that the material negative impact of pandemic on the financial results of Agora and its subsidiaries will not deepen. Both Agora and all the companies of the Group have taken a number of measures aimed at minimizing the losses caused by the COVID-19 pandemic and the Group's rapid return to the growth path of both revenues and operating results.
Most of the cost categories and investment expences were limited, which decreased the amount of operating costs of the Group in the 2Q2020 by PLN 96.1 million, despite the one-off events.
According to the company's estimates, all these activities will result in decrease in operating cost of ca. PLN 209.0 million in the 2Q and 3Q2020 as compared to the same period of 2019.

Both Agora and its subsidiaries also seek to receive the available forms of public support for businesses. The companies from the Agora Group applied for a total of PLN 13.9 million of public support from the Guaranteed Employee Benefit Fund to safeguard jobs during pandemic. The General Meeting of Shareholders, following the recommendation of the Agora’s Management Board, agreed to keep the profit generated in 2019 in the company.
Additionally, Agora and Helios finalized negotiations with banks, securing PLN 100.0 million financing for Agora and PLN 40.0 million for Helios.

Based on the available market data, Agora estimates that the level of cinema admissions in Poland will be lower by 50% yoy. The value of the advertising market in Poland, which is one of the factors determining the Group's revenue level, will not decrease to the extent Agora anticipated in the report for the 1Q2020. According to the Company's latest estimates, based on the forecast of GDP value in Poland and the data on the advertising market, in 2020, the advertisers will limit their expenditure on promoting their goods and services by ca. 8.0% -12.0% compared to 2019. Preliminary data related to the subsequent quarters of 2020 show a decrease in the scale of drops in advertising revenues and return of advertisers to the media.

Footnotes:
* Source: data refer to advertisements and announcements in 6 media (press, radio, television, outdoor, internet, cinema); Agora's estimates (press based on Kantar Media and Agora's monitoring, radio based on Kantar Media), Izba Gospodarczej Reklamy Zewnętrznej (IGRZ), Starcom (TV, cinema, internet).
** The loss of the Agora Group at the EBIT level, without the impact of IFRS 16, amounted to PLN 44.8 million in 2Q2020. In this approach, the Group recorded an EBITDA loss of PLN 13.8 million.