THE FINANCIAL RESULTS OF THE AGORA GROUP IN 1Q2019 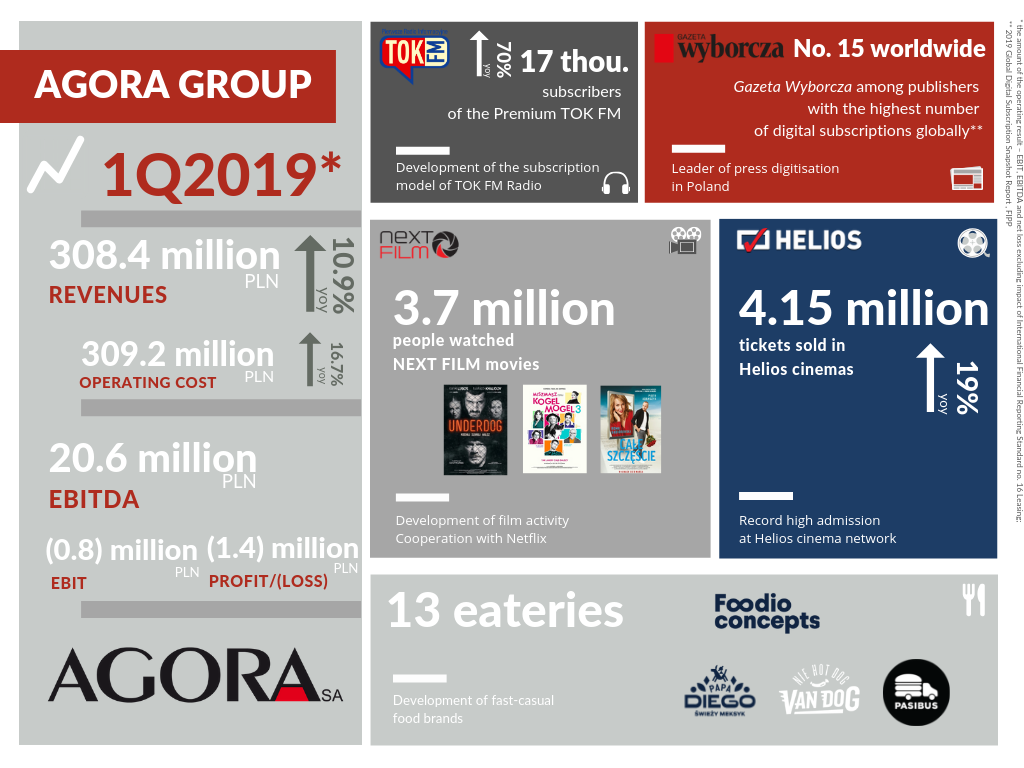 Record-high revenues from film activity and tickets sales in Helios cinema network growing twice as fast as the market provided the Agora Group with higher yoy revenues in the 1Q2019. The Group successfully develops sales of content in the subscription model - including Premium TOK FM, as well as food service activities, opening next premises under the Papa Diego and Van Dog own brands and planning the development of the Pasibus brand.

The results of the Agora Group in 1Q 2019 were significantly impacted by the entry into force of IFRS 16. In order to maintain the comparability of data, this press release presents data without the impact of IFRS 16. More information on the effects of implementing IFRS by the Agora Group can be found in the financial statements for 1Q2019.

In 1Q2019, total revenues of the Agora Group increased by 10.9% yoy and stood at PLN 308.4 million. Higher yoy inflows from the movie business amounting to PLN 27.7 million and higher income of Helios cinema network had the largest impact on the Group’s revenue level. In the period under discussion, NEXT FILM (subsidiary company of Helios S.A.) distributed the following film productions: Underdog, MiszMasz czyli Kogel Mogel 3 and Całe szczęście, which were some of the most popular Polish films in the first three months of 2019. The entire Polish cinema market noted a very high turnout in this quarter (up by 8.8% yoy), and the ticket sales dynamics of Helios was twice as high as the market rate, reaching 19.0% (PLN 76.8 million in revenues) 1. Helios also recorded an increase in concession sales by 28.8% yoy.

Additionally, the Agora Group increased copy sales revenues to PLN 34.5 million, mainly due to the growth of income from digital subscriptions of Wyborcza.pl, proceeds from the sale of the traditional version of the daily and higher sales revenues of Agora Publishing House. Group's revenues from other sales in the amount of PLN 13.9 million were also higher, i.a. thanks to the proceeds from food service activities developed by Foodio Concepts under the brands of Papa Diego and Van Dog.

On the other hand, revenues from the sales of advertising and printing services were lower. The decline of the former was affected by the reduction in ad expenditure noticeable in the 1Q2019 in Poland. As a result, revenues from the Radio, Press, Internet and Outdoor segments decreased. Simultaneously, lower proceeds from printing activities were associated with a decrease in production and the implementation of the restructuring process in the Print segment.

The Group’s operating costs in 1Q2019 increased by 16.7% yoy and amounted to PLN 309.2 million. This was significantly influenced by the growth of outlays on external services, in particular the costs of fees for film producers due to the high popularity of titles distributed into cinemas by NEXT FILM and rents in the Helios network. Expenses for external services also increased in the Print segment, Agora Publishing House and Outdoor segment.

The costs of materials and energy consumed and the value of goods and materials sold increased, mainly from higher costs of newsprint, higher concession sales at cinemas, higher number of multiplexes in Helios network, development of the restaurant business and higher costs of the Agora Publishing House. On the other hand, the Group's cost of marketing and promotion in 1Q2019 was influenced by promotion activities related to the movie business of the Group, as well as higher yoy marketing and promotion costs in the Helios cinema network.

At the same time, the Agora Group reduced staff costs in the discussed period, particularly in the Press, Internet and Print segments due to lower employment in these areas. It is worth noting, however, that the Group's result was charged additionally with the costs of provision for group lay-offs in the Print segment. A significant increase in the staff costs occurred in the Movies and Books segment, mainly as a result of development activities of the Helios network and food service activities, as well as changes in the minimum hourly rate. Expenses in this category were also higher in the Radio and Outdoor segments.

Without the impact of these one-off events, the operating results of Agora Group in 1Q2019 would be significantly better yoy. The Group's EBITDA would increase to PLN 26.2 million, EBIT operating profit would be PLN 4.8 million, and net profit PLN 3.1 million.

However, taking into account the aforementioned factors, the Agora Group's result at the EBITDA level in 1Q2019 was lower yoy and stood at PLN 20.6 million. The Group recorded an operating loss at the EBIT level of PLN 0.8 million, as well as a net loss of PLN 1.4 million.

From the beginning of 2019, the Agora Group implemented subsequent projects in accordance with its development strategy for 2018-2022. The Group successfully develops, among other things, sale of content in the subscription model. Thanks to the digital subscription, to a large extent, the revenues from the copy sales in the Press segment increased, while Radio TOK FM observed growth of number of subscribers of the Premium TOK FM offer to over 17 thousand. Agora also focuses on development of food service activities - Foodio Concepts, a company from the Helios group, has already opened 13 premises under its own brands Papa Diego and Van Dog (in 2019 a total of about 20 new restaurants are to be opened). Additionally Helios has received the decision of the Office of Competition and Consumer Protection on approving concentration and will develop the Pasibus brand through a dedicated Step Inside company. In 1Q2019, the Group also started the process of restructuring its printing activity, carried out in connection with the ongoing decline in revenues from the sale of coldset services. As a result of the group lay-offs, 142 employees were made redundant in the Print segment, while the entire printing production is being transferred to Warsaw and processes are being optimized.

1 Ticket sales data are estimates of the Helios group according to Boxoffice.pl data that is based on data provided from film distributors. The sale of cinema tickets is reported in periods that are not identical to the calendar month, quarter or year. The number of tickets sold in a given period is measured from the first Friday of a given month, quarter or year to the first Thursday in the following month, quarter or reporting year.