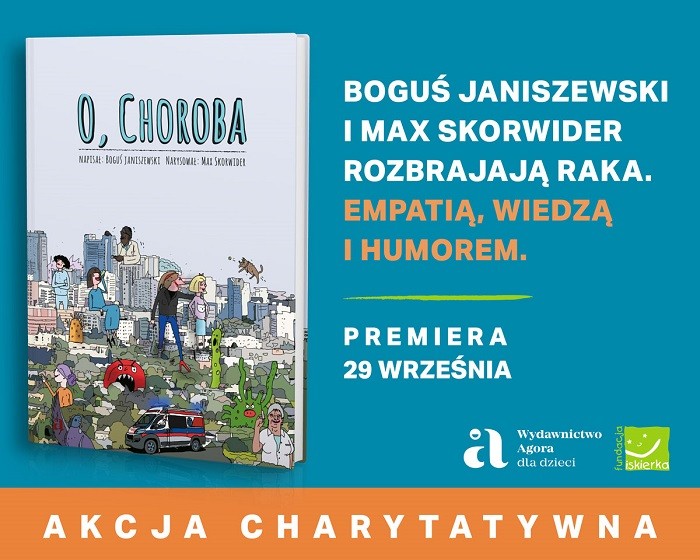 "O, choroba” is a literary charity campaign, as part of which the Agora Publishing House in cooperation with the ISKIERKA Foundation will publish a special book. The income from its sale will support children with cancer and their families. The title will have its premiere on September 29, 2021 - at the end of the childhood cancer awareness month, while the book’s pre-sale is already underway. Anyone can support the campaign by buying a copy of the book "O, choroba” in online stores – on Kulturalnysklep.pl and Empik.com.

The book "O, choroba” is a publication that has never been available on the children's literature market. Addressed to readers aged 9-12, it takes up with a difficult topic of oncological disease in a completely innovative and unconventional way. The story of twelve-year-old Adela, who meets a disease on her way, is a suspenseful and funny adventure story in a comic form. In a professional and understandable for young readers manner, the book explains what the disease is all about and what is happening with the body fighting cancer. It also shows everyday life of young patients, full of surprising events and extraordinary fun.

"O, choroba” was created for charity by respected authors: writer Boguś Janiszewski and illustrator Maks Skorwider in cooperation with psychologists and beneficiaries of the ISKIERKA Foundation. Its aim is to help children, their parents and the environment to work through the difficult emotions accompanying the disease. The story of main character named Adela is based on real stories of children struggling with cancer and those who have already managed to recover.

- (...) When I started writing the book, I had no experience with cancer before. I was a layman on this point, as are millions of us. At the same time, I assumed that the book must be thoroughly real. I started the topic with some ideas about cancer. As it turned out later - mostly wrong. Moreover, and I admit it with some awkwardness – unlike my heroes I haven't spent a single night in a hospital bed in my entire life. Now I understand better how lucky I am – writes in the book’s afterword the author Boguś Janiszewski.

The sponsors of the publication are: Voxel, Anbud, Amgen, Exorigo UPOS, The Software House and Sordrew. Empik was also involved in the campaign.

The book will be released on September 29, 2021 – at the end of the childhodd cancer awareness month. At that time, knowledge on this subject is disseminated around the world under the slogan #GoldSeptember and the symbol of the "golden ribbon". The golden color means what is most precious in life – health of children. In September various objects around the world are illuminated in gold to show support for sick children and their families.

On September 15 at 8 p.m. the most recognizable buildings in Silesia will be highlighted in golden color: the Silesian Stadium, Spodek and the Silesian Opera. On Wednesday, September 15, the Senate of the Republic of Poland will also host a conference "Contemporary challenges in pediatric hematology and oncology", during which the Iskierka Foundation will present information about the joint project with Agora Publishing House. On the other hand, in the last week of the #Goldseptember campaign, objects in various Polish cities will be highlighted in golden color, including Warsaw, Gdańsk, Wrocław, Kielce, Olsztyn, Toruń, Gorzów Wielkopolski and again Silesia.

The book "O, choroba” is now available for pre-sale on Kulturalnysklep.pl and Empik.com. A copy of this unique publication will cost 35 PLN in all sales channels. The income from the sale of the book will be allocated to providing additional access to psychological help for sick children, especially in the face of a pandemic and its restrictions. These will be individual crisis interventions, psychological consultations and short-term therapies for the beneficiaries of the ISKIERKA Foundation and their families – both during treatment, after its termination and for parents after the loss of a child. The help makes it possible to improve the functioning of children in the treatment process, gives the opportunity to discharge negative emotions and limit negative, psychological consequences of cancer also for the family and loved ones.

An online premiere with the authors of the book – Boguś Janiszewski and Maks Skorwider will be held on September 29 at 6 p.m. on the Facebook profiles of Empik and Agora Publishing House. The meeting will also be attended by the president of the ISKIERKA Foundation, Jolanta Czarnicka-Siwecka and one of the ambassadors of the charity campaign - actor and lecturer Jarosław Boberek.

"O, choroba” by Boguś Janiszewski and Maks Skorwider is the fourth charity project created by Agora Publishing House and the second – after the collection of short stories entitled "Wszystkie kolory świata” – addressed to young readers. So far, thanks to the sale of the publication Wszystkie kolory świata”, Agora Publising House has managed to donate over 240,000 PLN for additional hours of the line 116 111 - the helpline for children and adolescents of the Empowering Children Foundation. Thanks to the sale of the book published in 2020 entitled "Nadzieja" Agora Publising House has managed to collect the amount of 1 million and 694 thousand PLN which helped support 62 social welfare centers and hospices. And in 2015 the income from the sale of the book "NieObcy" in the amount of 150,000 PLN, published in cooperation with the Polish Humanitarian Action, was donated to help refugees – victims of the war in Syria.

The ISKIERKA Foundation is a Polish non-profit organization, since 2006 involved in building financial, psychological and social support systems for children with cancer and their families. The Foundation looks after over 700 children who are treated mainly in specialized centers in Katowice, Chorzów, Zabrze and Rzeszów. It implements nationwide projects and provides financial aid for children also treated in other centers in Poland and abroad. More information – fundacjaiskierka.pl.