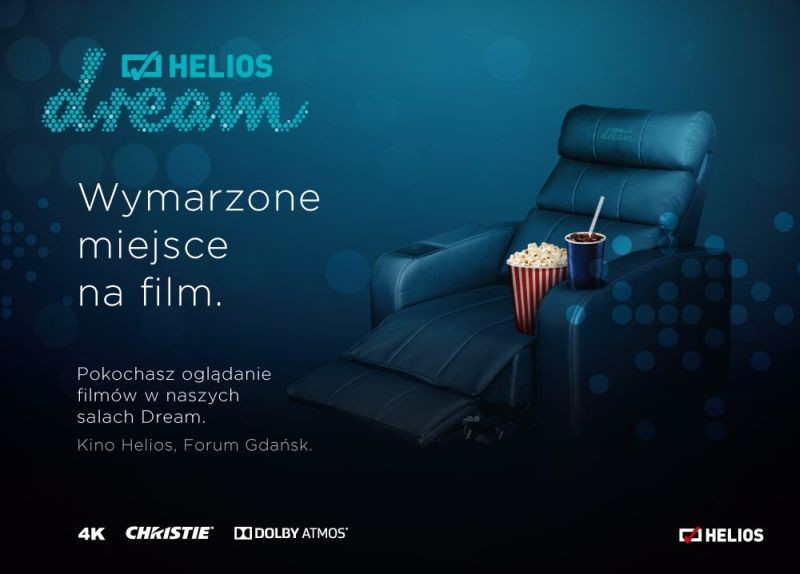 Helios Dream is a new concept of Helios cinema chain, which is a response to the dream of intimate, comfortable space for watching movies in fantastic quality of sound and image. The first two Helios Dream screening rooms - outstanding for their modern design, with leather recliners with electric seat adjustment, 4K image resolution and Dolby Atmos sound - are already operating in the latest Helios multiplex at Forum Gdańsk.

– Thanks to Helios Dream, we can fulfill our and our audience's dreams of sitting in the cinema like on a home sofa and enjoying the film in the best possible resolution, with phenomenal sound effects - says Tomasz Jagiełło, President of the Helios cinema chain. - Additionally, the concept of Helios Dream sets new standards for film reception at the cinema - it is a unique premium offer available to everyone, which will satisfy even the most demanding cinema fans.

Helios Dream rooms have been designed in such a way that the viewers can watch the films in an intimate atmosphere. They are unique in their modern design, with 50 seats in each of them. These are comfortable, recliner seats, and it's up to each spectator to decide how to position the seat. In addition, the armrests of each of them are fitted with popcorn and drink holders.

Helios Dream screening rooms are equipped with modern projectors from Christie, considered one of the most innovative companies in the field of visual technology in the world. The projectors are designed to display spectacular 4K images and 3D projections in DepthQ 3D, so viewers can enjoy superb quality, realistic images with a wealth of vibrant colours.

The innovative Dolby Atmos sound system complements the latest imaging solutions. The audience can feel like being in the middle of the movie scene thanks to dozens of independent soundtracks distributed to loudspeakers located not only around the auditorium, but also on the ceiling. Additional audio channels enable precise placement of audio effects in the auditorium, creating a three-dimensional sound depth.

More information on the Helios Dream concept can be found on the website Helios.pl/dream

The first two rooms based on the Helios Dream concept were built in the newest 9-room complex of the chain. The multiplex was opened in a unique location - at Forum Gdańsk, a shopping and entertainment complex in the very center of Gdańsk. It is a modern urban space within the Targ Sienny and Targ Rakowy areas - historic places of Gdańsk trade.
More about Helios cinema at the Forum Gdańsk: https://www.agora.pl/en/new-helios-multiplex-at-the-forum-gdansk

Helios is Poland's largest multi-screen cinema chain - it owns 45 cinemas with 253 screens and over 50,000 seats. The company concentrates its operations mainly in medium-sized cities, but its cinemas are also present in the largest Polish agglomerations, such as Łódź, Tricity, Wrocław and Poznań. The first Helios cinema in Warsaw will be opened in the 4th quarter of 2018 in the Blue City shopping center.