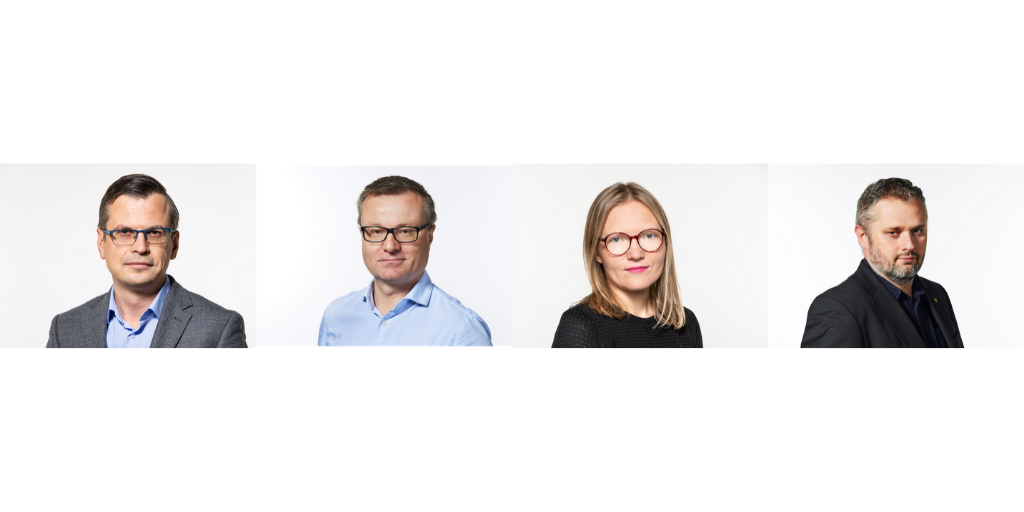 - Mikołaj Chrzan, head of the local editorial offices of the daily,
- Roman Imielski, head of the National desk,
- Aleksandra Sobczak, head of the Wyborcza.pl website
- and Bartosz Wieliński, head of the Foreign desk.
Each of them will combine current duties with the new ones in the management of the editorial team of "Wyborcza".
Mikołaj Chrzan will be responsible for local editors and their content published in paper editions and local Wyborcza.pl websites, as well as for the work, organization and budget of  all "Gazeta Wyborcza" editorial staff. He will be responsible for: Culture desk, Co Jest Grane 24, "Książki. Magazyn do czytania","Wyborcza TV", the Foto departament and the team responsible for the development of the Klub Przyjaciół Wyborczej.
Roman Imielski will coordinate the work of National desk, Opinions, Wyborcza to Wy, Sport desk and the investigation team, while being responsible for political content on Wyborcza.pl.
Aleksandra Sobczak will lead Wyborcza.pl, in particular in the field of social issues. She will also supervise the teams of the Economy and Science desks, Wyborcza.Tech and video departament, as well as editorial development projects.
Bartosz Wieliński will be responsible for the magazines "Duży Format", "Ale Historia" and "Magazyn Świąteczny", as well as supervising the Foreign desk. He will also be the representative of "Wyborcza" on international forums and coordinating editorial cooperation with European and global journalistic organizations.
Until now, Piotr Stasiński and Aleksandra Klich were the deputy editor-in-chief of "Gazeta Wyborcza". Piotr Stasiński decided to retire, although he will remain in the daily's team as a publicist. Aleksandra Klich, on the other hand, will continue to manage the editorial team of "Wysokie Obcasy", weekly magazine for women.
BIOGRAMS
Mikołaj Chrzan published his first text in "Gazeta Wyborcza" in 1996. In the years 2012 - 2014 he was the editor-in-chief of the Wrocław edition of "Wyborcza", and in 2015 - 2018 - in the Tri-City (Gdańsk, Gdynia, Sopot). In 2019, he was appointed the head of all local editorial offices of "Gazeta Wyborcza".

Winner of the 2007 "Ostre Pióro" award, nominated for the Grand Press in 2009 in the News category. He is a graduate of sociology at the University of Gdańsk, economics at the Warsaw School of Economics and MBA studies at the Gdańsk Foundation for Management Training.
Roman Imielski started his career in "Gazeta Wyborcza" already in college - in May 1995 in the Katowice office of the newspaper. From 1996 he was a reporter from Zagłębie, in 2001 he started working in the editorial office in Warsaw as the deputy head of the Sport desk and head of local reporters. In 2007 he became deputy head and then head of the Foreign desk. He also served as the editorial secretary of the "Gazeta Wyborcza", head of the Wyborcza.pl website and of the video department. Since 2017, he has been managing the National desk. Together with Radosław Leniarski, he wrote the book "Najważniejszy mecz Kremla" (2018). He graduated from history at the University of Silesia.
Aleksandra Sobczak has been associated with "Gazeta Wyborcza" for 15 years. She started in the Economy desk as an editor, then became its head. She was also the deputy editor-in-chief of "Wysokie Obcasy". In 2017, she became the editor-in-chief of "Gazeta Stołeczna" (Warsaw edition of the daily), and since May 2019 she has been managing the Wyborcza.pl newsroom. She is a graduate of journalism at the University of Warsaw.
Bartosz Wieliński joined the Katowice editorial office of "Gazeta Wyborcza" as an apprentice in 1998. In the years 2005–2009 he was a correspondent of "Wyborcza" in Berlin, Germany, later he worked in the Foreign desk, where he continued to deal with German issues. Since 2017, he has been managing the Foreign desk.
In 2013, he won the Grand Press award for the best reportage and the "Pióro Nadziei" award by Amnesty International. Author of the book "Źli Niemcy" (2014). A graduate of journalism at the University of Silesia and the International School of Political Sciences.