Gazeta.pl and Ukrayina.pl launch a charity auction of iconic postage stamps with signatures of Ukrainian statesmen 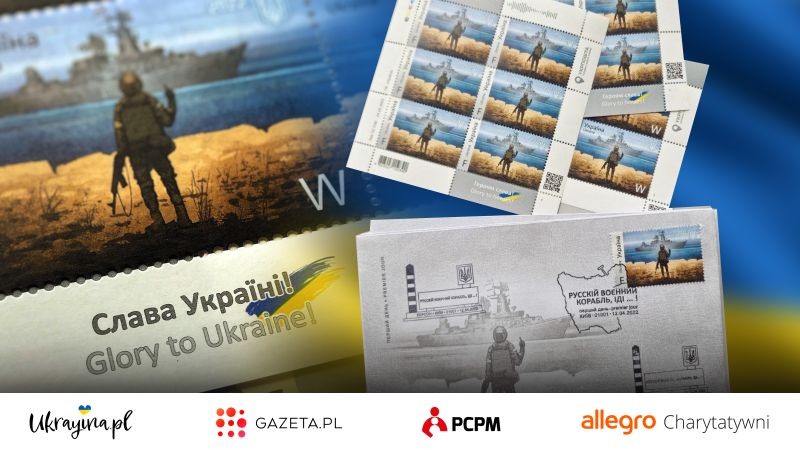 Vitali Klitschko, Dmytro Kuleba and the now famous soldier Roman Gribov – those public figures have put their signatures, thanks to the Ukrayina.pl journalists’ efforts, on the undersides of three unique stamps issued by the Ukrainian Post and obtained by Gazeta.pl. The stamps commemorate the “greetings” of the soldier from Snake Island to the Russian warship at the beginning of the Russian aggression on Ukraine. Gazeta.pl and Ukrayina.pl, together with the PCPM Foundation and Charytatywni Allegro charity platform will auction them and use the raised funds to buy ambulances and medical equipment for Ukraine.

The stamps issued by the Ukrainian Post show a soldier standing on the seashore and pointing his middle finger towards the Russian warship ‘Moscow’. Below the picture is the famous sentence – ‘Russian warship, go *** yourself!’. The stamps commemorate the defenders of Snake Island and symbolize Ukraine's heroic resistance. Gazeta.pl has managed to get three of the already legendary stamps. In addition, each of them is signed on the back, which makes these copies even more unique. The first one was signed by a boxing legend and current major of Kyiv, Vitali Klitschko. The second one has a signature of Dmytro Kuleba, the Ukrainian Minister of Foreign Affairs. The last one was signed by Roman Gribov, a soldier from Snake Island whose famous “greetings” sent to the enemy’s warship were immortalized on the stamps.

On Monday, 9 May 2022, The PCPM Foundation has launched a special fundraiser on the Allegro Charytatywni charity platform, and Gazeta.pl together with Ukrayina.pl, Ukrainian-language news website for Ukrainians in Poland, have created three auctions where the stamps signed by Klitschko, Kuleba and Gribov can now be bid on. The mentioned websites will also encourage their readers to create new auctions to support PCPM fundraiser and collect even more money. All funds will be allocated to the purchase of ambulances and medical equipment for Ukraine. The auctions will end on Wednesday, 18 May 2022.

– These stamps are a real treat for collectors – explains Rafał Madajczak, Creative Director at Gazeta.pl. – It is worth noting that in Ukraine itself it is hard to obtain them, and in addition, we have managed to get the signatures of three Ukrainian heroes, which further increased their value. We are counting on record amounts in our auctions, which, of course, will all be donated to helping the fighting Ukraine – he adds.

– Today, supporting Ukrainians in their fight against the Russian army is tantamount to saying: ’I believe freedom is the greatest value and that is why I am against the war started by Putin’ – emphasizes Uliana Vitiuk, editor-in-chief of the Lviv-based "Expres" and the Ukrayina.pl website, co-author of the auctions. – Each auction is a unique chance to support Ukraine. We invite to participate everyone who, just like us, cares for a peaceful and safe future for the country. This is an opportunity to become a part of a great story.

Since the outbreak of the war, Gazeta.pl has been strongly involved in helping Ukraine attacked by Russia. Acting in the spirit of its editorial declaration, Gazeta.pl journalists report the latest news on regular basis, preparing expert articles, live coverage and special editions of video programs. From the first day of the war, the portal has been a partner of the PCPM Foundation’s fundraiser which has already collected over PLN 6 million for humanitarian aid in Ukraine. With new residents of Poland in mind, the editorial team of Gazeta.pl together with journalists of the Ukrainian "Expres" created the Ukrayina.pl – a news website for Ukrainians in Poland, publishing information on how to arrange formalities in Poland, where to obtain documents and how to find oneself in the new reality, as well as articles about the current situation in Ukraine – all in Ukrainian language.

***
Gazeta.pl is one of the largest Polish web portals, and its websites (Ukrayina.pl among others) are among the leading in their thematic categories. They present users with a variety of content, including articles and original videos – also available through mobile applications. Top news from Poland and the world, quality articles and reliable analyses, business news, as well as sports and lifestyle content, can all be found on the main page of the portal. Gazeta.pl is a part of the Agora Group – a media and entertainment company listed on the Warsaw Stock Exchange.
According to a Mediapanel survey, in April 2022, Agora Group websites were visited by 18 million users (real users), who made over 601 million page views that month. The most frequently chosen websites include Plotek.pl, Sport.pl, Wiadomości.Gazeta.pl, eDziecko.pl, Kobieta.Gazeta.pl and Next.Gazeta.pl.