Financial results of the Agora Group in the 3Q2021 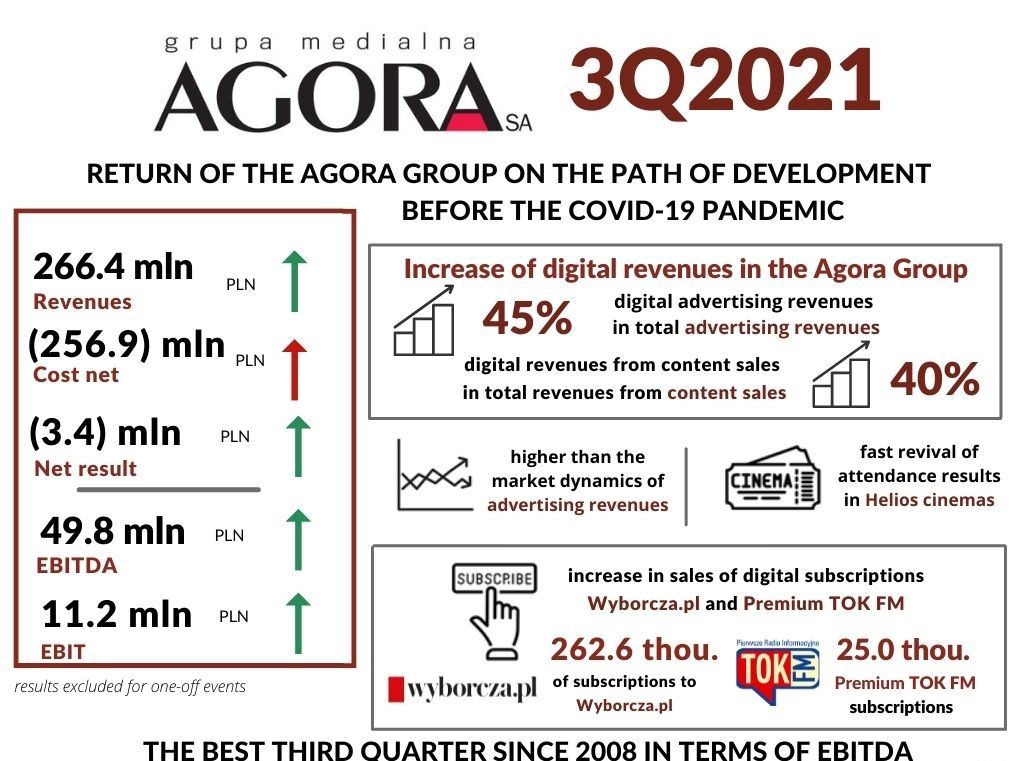 Helios' unique price offer combined with high cinema attendance, as well as the advertising inflows growing faster than on the market ensured the Agora Group a significant increase in revenues in the 3Q2021. Effectively using market trends and adjusting its products and services to them, the Group significantly improved its operating results - achieved a profit at the level of EBIT, while its EBITDA increased by 50%. Thanks to this, the period of July-September this year turned out to be the best 3Q for the Agora Group in 13 years.

- The Agora Group is quickly rebuilding its results - all categories of our inflows systematically grow, in all areas of our activity. The best results of the 3Q since 2008 are due to the intensive work of the entire team and the favorable market situation, especially the soaring cinema attendance and record-high advertising spending in Poland1 - says Bartosz Hojka, President of the Management Board of Agora. - Importantly, the Agora Group's success in the last quarter was influenced by the improvement of operating results2 in all Agora's business segments. We are also pleased with the measurable effects of the digitization course chosen a few years ago - already almost half of the Group's advertising revenues come from digital services, and in the case of revenues from the sale of digital content this share reaches 40%.

In the 3Q2021, the total revenues of the Agora Group amounted to PLN 266.4 million and were 38% higher than a year ago. This was mainly due to the increase in revenues from cinema activities, benefiting from the gradual lifting of administrative restrictions on the functioning of cinemas and the return to large screens of premieres of the largest film productions. During the discussed period, the revenues of the Movies and Books segment amounted to PLN 105.1 million and contributed the most to increasing the total revenues of the Agora Group. Helios cinemas recorded an increase in revenues from ticket sales - by 184% to PLN 46.0 million, which was mainly due to the unique price offer, i.e. a dynamic price list, in which the ticket price depends on the date of its purchase. In the period of July-September this year, over 2.4 million tickets were purchased in the cinemas of the network, which is almost 160% more than last year. The growing popularity of online cinema ticket sales was a major contributor to this success. This channel is already responsible for 40% of revenues from ticket sales. Income from concession sales in cinemas more than doubled, and revenues from film activity were almost 5 times higher yoy. The pace of the reconstruction of the cinema market is optimistic – in October 2021, the number of tickets sold in Helios was identical to that in 2019, i.e. before the outbreak of the pandemic.

In the past quarter of this year, the revenues from other activities of the Group also increased, mainly from advertising, thanks to growing expenses in the entire Polish advertising market. Inflows from the sales of advertising services of the Agora Group were higher in all operating segments – in total they increased by over 14% as compared to the 3Q2020 and amounted to PLN 125.5 million. The advertising revenue of the Internet segment increased the most, mainly due to the activities of the Gazeta.pl division and Yieldbird, as well as the Movies and Books segment - due to the resumption of cinema operations and the return of viewers to Helios multiplexes.

On the other hand, the value of the Group's copy sales increased by over 4% to PLN 34,4 million, mainly owing to higher revenues from the sale of subscriptions to Wyborcza.pl content and publications of the Agora Publishing House. At the end of September this year, the number of active paid digital subscriptions to Gazeta Wyborcza amounted to over 262.6 thousand, which means an increase by 9% compared to the corresponding period of 2020. The daily's digital inflows, i.e. from the sale of subscriptions and digital advertising, reached nearly 16.5 million PLN, which accounted for almost 40% of its total revenues. In Radio, income from internet activities was 25% higher than in the previous year, mainly due to the increase in revenues from internet advertising services and from the sale of Premium TOK FM subscriptions. The number of Premium TOK FM accesses sold at the end of 3Q2021 increased to 25.0 thousand.

Additionally, revenues of the Agora Group from the food business activity, currently developed under the Pasibus brand, as well as from other sales are systematically growing.

The net operating costs of the Agora Group were higher in the 3Q2021 by over 29% yoy, amounting to PLN 255.2 million. The increase in expenses, observed in all operating segments, was mainly due to the larger scale of the Group's operations in the face of smaller restrictions related to the COVID-19 pandemic. At the same time, the salaries of the Agora Group’s team returned to the standard amount after their reduction for 6 months in the pandemic year 2020. The largest operating expenditure item was the cost of external services – higher by 36% than in the previous year and amounting to PLN 93.7 million. The most significant increase in this category was visible in the Movies and Books segment, mostly due to higher costs of purchasing film copies and higher fees for film producers. It is also worth noting that a number of one-off events and cost-saving measures taken in 2020 had a significant impact on the level of the Agora Group's operating expenses. In 2021, their number and value were significantly lower3.

Ultimately, thanks to a significant increase in revenues from all sources, in the 3Q2021 the Agora Group noted an improvement in operating results as compared to 2020. The profit at the EBITDA level increased by 50% yoy to PLN 49.8 million, while the profit at the EBIT level amounted to PLN 11.2 million. The net loss stood at PLN 1.5 million, and the net loss attributable to the shareholders of the parent company was PLN 1.2 million4.

The significant recovery of the advertising market in Poland observed in the past quarter (increase by 12.5% ​​yoy), as well as the fact that the value of expenditure on promotion and advertising in the period July-September 2021 was higher compared to the pre-pandemic 2019 decided on increasing Agora's estimates of the advertising market growth in 2021. According to the company's current forecasts, throughout 2021, advertisers will increase spending on promoting their goods and services by approximately 13-16%. This trend is visible in all market segments.

1 Advertising market - Agora's estimates (press based on Kantar Media and Agora's monitoring, radio based on Kantar Media), IGRZ (outdoor advertising, the number of entities reporting revenues to IGRZ has decreased since January 2014), as well as preliminary data from Publicis Media (TV, cinema, internet).