Financial results of the Agora Group in the 3Q2020 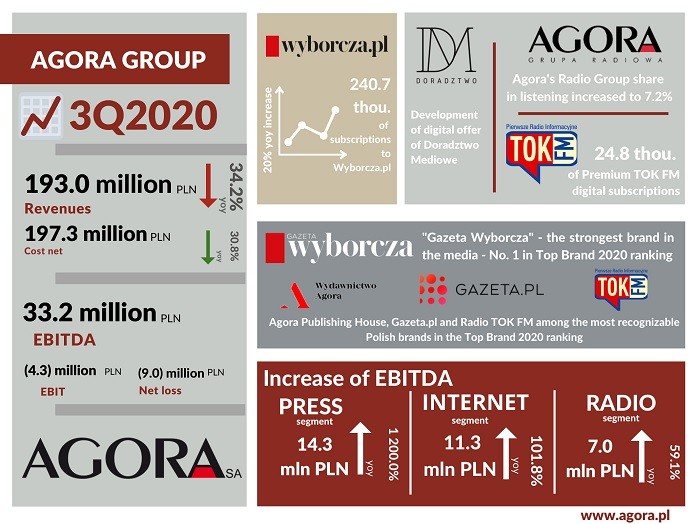 The 3Q2020 was a time of increased cost discipline for the Agora Group and intensive work on rebuilding the results of all its ventures, which faced with the negative effects of the COVID-19 pandemic. The actions taken allowed to improve the operating results of the Press, the Internet and the Radio segments. The Group recorded higher revenues from the copy sales, especially from the sales of digital subscriptions of Gazeta Wyborcza and publications of Agora’s Publishing House, and its operating costs decreased by nearly PLN 90 million, translating into a positive result at the EBITDA level.

In the 3Q2020, the total revenues of the Agora Group amounted to PLN 193.0 million and were slightly lower 34% yoy. This was mainly due to the reduction of inflows from cinema business related to administrative restrictions on the operation of cinemas in Poland, including setting a limit of viewers in screening rooms, as well as suspension of premieres of the largest film productions. For this reason, the ticket sales in the Helios cinemas decreased by over 74%, and cinema concession sales dropped by almost 72%. Over 932.9 thou. tickets were sold in Helios multiplexes during the period under discussion, which is almost 73% less than in the 3Q2019. According to Boxoffice.pl data, at that time the number of tickets sold in Polish cinemas amounted to over 3.4 million and decreased by almost 77%*.
Additionally, in all areas of the Group, advertising sales declined - by a total of 18% to nearly PLN 110 million. The greatest dynamics of decrease in this respect were recorded in the Movies and Books segment, mainly due to limitations in cinema operations and, as a result, a lower number of viewers at film screenings having contact with advertisements. The Press and the Outdoor also noticed a significant reduction in advertising budgets.
Moreover, in the period between July and September 2020, the Group recorded lower revenues from the sale of printing services related to a lower volume of orders, as well as from movie business due to, i.a., a lower number of new titles in the cinema distribution. A decline in revenues from other sales was recorded in the Press segment, mainly as a result of reduced inflows from music festivals related to sanitary restrictions.
On the other hand, the revenues from this title in the Movies and Books segment were higher thanks to the development of food business activities, distribution of books in online bookstores and sale of license for distribution of music abroad.
The only revenue category that increased compared to the 3Q2019 was copy sales higher by 5.1% yoy. This was due to the growing sales of subscriptions to Wyborcza.pl and publications of Agora’s Publishing House.

In the 3Q2020, the Agora Group reduced its net operating costs by almost PLN 90 million to PLN 197.3 million. They were lower in all the Group's operating segments, and their greatest decrease was recorded in the Movies and Books and the Press segments.
The level of costs in this period was influenced by a number of savings measures taken by Agora. Some of the factors allowing for the reduction of the Group's expenses resulted also from legal regulations - suspension of payments for cinema rents in shopping malls, as well as from the impact of the pandemic on selected activities, e.g. on costs of payment for film copies and for film producers, as well as costs related to the implementation of advertising campaigns. The full-time employment in the Group at the end of September 2020 amounted to 2,332 FTEs**.

Thanks to the cost discipline and dedicated work on the recovery of revenues in the 3Q2020, the Group achieved a profit at the EBITDA level of PLN 33.2 million. The loss on the EBIT level stood at PLN 4.3 million, and the net loss at PLN 9.0 million***. It is worth noting that the Group's performance in the 3Q2020 was positively influenced by co-financing from the Guaranteed Employee Benefits Fund in the amount of over PLN 10 million.

The results of the Agora Group in the 3Q2020 were constantly under pressure from the effects of the COVID-19 pandemic and the actions of the government administration to limit the further spread of the virus. In the opinion of the Management Board of the company, the greatest negative impact of the pandemic on the Group's advertising activities was already visible in the 2Q2020, and in the near future the pace of decline in the Group's revenues from this activity should slow down. The cinema and food business activities of the Agora Group depend on decisions and actions taken by state authorities, to which the company is able to adjust efficiently.

In addition to saving measures and securing the financial liquidity of the entire organization, Agora's team implemented in the 3Q2020 many projects aimed to expand the Group's offer and flexibly adjust it to the current market circumstances. Among them, it is worth noting the development of digital sales channels and solutions. Gazeta Wyborcza and Radio TOK FM recorded further successes in this area. At the end of September 2020, the number of subscriptions to Wyborcza.pl amounted to nearly 241 thou. and it was 20% higher as compared to last year. On the other hand, 24.8 thou. subscribers had Premium TOK FM accesses. The digital distribution of content is also continued by NEXT FILM, making further productions from its film portfolio available on VOD platforms, including as part of cooperation with Netflix. Agora Muzyka is expanding its music offer in digital services, and Agora Publishing House in online bookstores. Kulturalnysklep.pl and Publio.pl, i.e. Agora's online bookstores, have introduced a new version of their websites with additional functionalities to attract new customers. Their popularity is growing, which is confirmed by the position of Publio.pl in the TOP3 most visited e-bookstores. Agora's advertising teams also focus on digital marketing solutions, e.g. Doradztwo Mediowe from the Agora Radio Group, which implements internet campaigns on an increasingly larger scale, including those in digital audio format.

Footnotes:
* Data on attendance at Helios cinemas is reported according to calendar periods, and data on market attendance - according to Boxoffice.pl. In the latter approach, the sale of cinema tickets is reported in periods that are not identical to the calendar month, quarter or year. The number of tickets sold in a given period is measured from the first Friday of a given month, quarter or year to the first Thursday of the following month, quarter or reporting year.
** After eliminating the effect of reducing the working time.
*** Without IFRS 16, in the 3Q2020, the Agora Group recorded a profit at the level of EBITDA of PLN 20.7 million, loss at the level of EBIT of PLN 2.7 million and net profit of PLN 0.8 million.