Financial results of the Agora Group in the 1Q2021 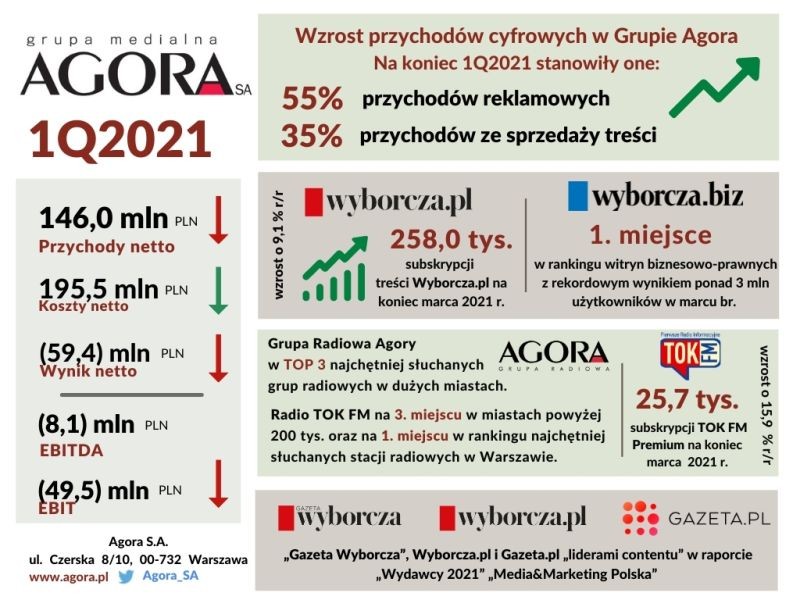 The beginning of 2021 was another quarter of intensive digital development for the Agora Group. Thanks to the acceleration of digitization processes, both the number of subscriptions for Wyborcza.pl and TOK FM increased, as well as the total level of the Group's revenues from digital. The further expansion of the DOOH channels was also carried out. Agora's internet and press segments improved their financial results. Despite strict cost discipline and good effects of the previously introduced savings initiatives, the Agora Group closed the 1Q2021 with loss, mainly due to the lack of revenues from the cinema business, which resumed it operations today – on 21 May.

- In the 1Q2021, the pandemic kept the cinemas locked and limited advertising spending. We used this time to strengthen our digital businesses. The share of Internet inflows in the total advertising revenues of the Agora Group amounted to over 55%. Sales of our digital content are also growing, includling subscriptions to Wyborcza.pl and TOK FM, already generating almost 35% of revenues from the sale of content - says Bartosz Hojka, President of the Management Board of Agora. - In the coming months, we expect a gradual rebuilding of the Polish advertising market. And from now on, the Helios crew invites viewers to their 50 cinemas, which has prepared a great repertoire with real hits for cinema fans of all ages.

In the 1Q2021, the total revenues of the Agora Group amounted to PLN 146.0 million and were lower by 50% than in the corresponding period of 2020. This was due to the ongoing COVID-19 pandemic and its consequences for the Group's businesses. The Movies and Books segment was the most affected by the pandemic . In the period January - March 2021, the Helios cinemas were still closed - therefore Agora did not record any revenues from cinema operations, i.e. from ticket sales and concession sales. However, the Group saw another significant increase in digital revenues - both from the sale of premium content, as well as online advertising.
The Group’s sales of advertising services decreased by slightly more than 20% to PLN 90.6 million. The ongoing COVID-19 pandemic was associated with the reduction of most advertising expenditure on the market - it was most noticeable in the Outdoor segment. Advertising revenues also decreased in the Movies and Books, the Radio and the Press segments. However, the Group’s internet activity recorded an increase in advertising inflows thanks to higher revenues of Gazeta.pl and Yieldbird. It was supported by investments in better exposure of advertising space on Gazeta.pl, thanks to which the portal has one of the highest viewability display indicators on the programmatic market. Additionally, all Agora's websites are already prepared to conduct advertising activities based on 1st party cookies and have implemented the highest standards of privacy management and user information security. It is worth noting that the share of digital and internet revenues in the total advertising income of the Agora Group has already exceeded 55%.
The inflows from copy sales reached PLN 33.3 million and declined by slightly more than 5% as compared to the 1Q2020. This was mainly due to the decrease in sales revenues from the traditional issue of "Gazeta Wyborcza", magazines and periodicals, as well as the Agora Publishing House. At the same time, the Agora Group recorded another increase in revenues from digital subscription of “Gazeta Wyborcza”. The number of active Wyborcza.pl subscriptions is systematically growing - at the end of March 2021 it reached over 258 thou., which means an increase of over 9%. The share of all digital revenues of a daily newspaper is also constantly growing, i.e. including the sale of advertising services, which in turn - together with optimization measures in the area of traditional press - allows to improve the result of the entire Press segment. It is also worth paying attention to the growing revenues from the sale of access to digital content of Radio TOK FM and tokfm.pl. The number of Premium TOK FM subscriptions at the end of the 1Q2021 was higher by 16% and amounted to 25.7 thou. The Agora's Radio Group benefits in this area from positive trends related not only to the increasingly popular payments for premium content, but also to the growth of the podcast market in Poland, which is among the fastest developing in the world. The monthly reach of podcasts in Poland, according to the data obtained in the Tandem Media survey from 2020*, already amounted to 31%, which means that almost every third Internet user listens to the programs available on demand on the Internet.
In the other revenue categories, Agora recorded lower inflows in the 1Q2021.

Operating in strict cost discipline, closure of cinemas and lack of distribution activities, as well as the effects of the savings initiatives implemented by the Management Board so far brought the Agora Group in the 1Q2021 another decrease in expenses, this time by over PLN 110 million. The net operating costs of the Agora Group declined by almost 37% and amounted to PLN 195.5 million. All businesses of the Agora limited their expenditure. In connection with the closure of the Helios cinema network, the greatest decrease in operating expenses was recorded in the Movies and Books segment.
It is worth noticing, however, that the comparability of data was influenced by last year's cost of write-offs on assets in the Internet and the Movies and Books segments in the total amount of PLN 21.4 million and the profit on sale of real estate in the amount of PLN 6.7 million. In the period from January to March 2021, the Group did not record any significant one-off events.

The 1Q2021 saw first signs of advertising market recovery, mainly due to the increase of advertising expenditure in internet. According to Agora's estimates based on available data sources, the value of total advertising expenditure in Poland in the period January-March this year amounted to approximately PLN 2.2 billion and was higher by 1.5% than in the same period of previous year. Agora estimates that throughout 2021, advertisers will increase spending on promoting their goods and services by 4% to 7% compared to 2020.
From 21 May 2021, the cinemas in Poland may return to operation, and the reopening of restaurants is scheduled for 28 May. The Helios team has decided to restart its multiplexes within this timeframe, accelerated to the original plan - today, 10 minutes after midnight, 50 cinemas of the network have been opened throughout the country. Their viewers, who in the vast majority declared their willingness to return to going to the cinema as often as before the pandemic – according to the Helios survey conducted in March this year (92% of respondents’ answers)***, can count on an interesting repertoire. There are many Polish and foreign films waiting for the premiere. In the first weeks of operation, the screens of Helios network will feature, i.a., productions for children and teenagers "Cruella", "Tom and Jerry", "The Croods 2", "Cats & Dogs 3: Paws Unite", "Mortal Kombat", as well as the romantic comedy "Druga połowa" and Oscar-winning titles: "Nomadland" and "The Father".