FINANCIAL RESULTS OF THE AGORA GROUP IN THE 1Q2020 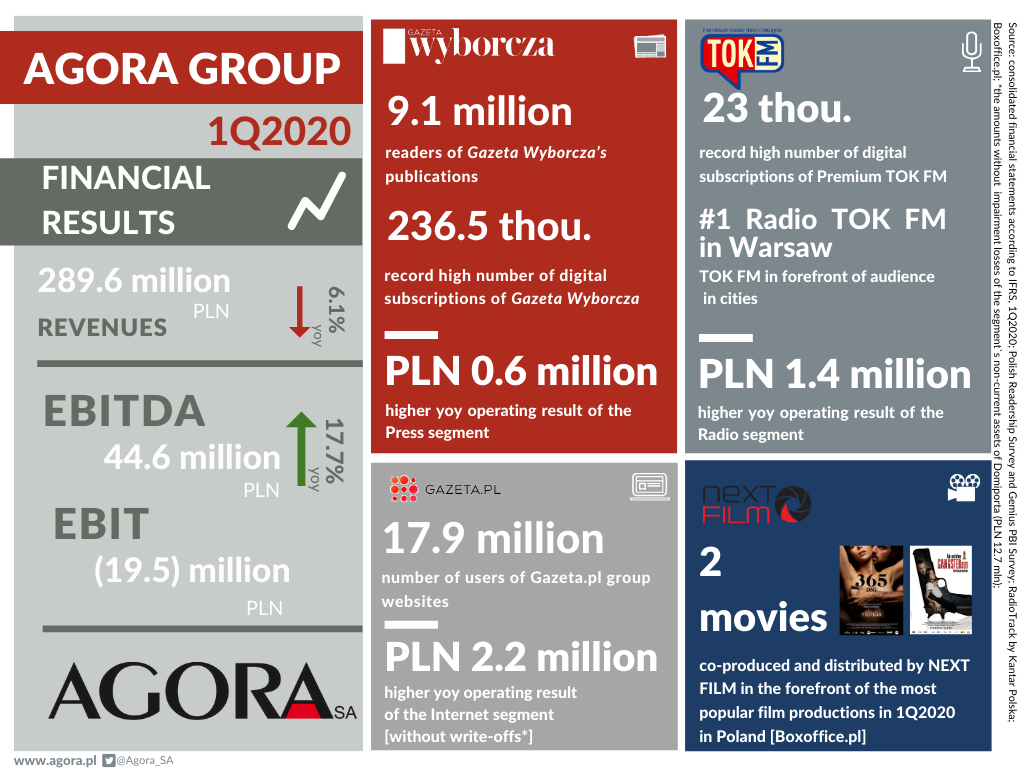 In the 1Q2020, the advertising revenue of the Agora Group grew faster than on the market. The inflows from the copy sales increased, among others thanks to the rapidly growing number of digital subscriptions of Gazeta Wyborcza. The Group's online1, press and radio activities recorded improved results, while Wyborcza.pl and TOK FM subscription offers reached further record levels. Agora's operating results were determined by one-off events, in particular those related to write-offs for assets of Group’s subsidiaries, as well as the effects of the COVID-19 pandemic, visible from mid-March this year, primarily associated with the closure of cinemas and the increasing reduction of advertising budgets.

In the 1Q2020, total revenues of the Agora Group amounted to PLN 289.6 million and were lower by 6.1% yoy. This was mainly caused by a nearly 20% decrease in revenues from the tickets sales in the Helios cinemas, which were closed by an administrative decision on 12 March this year, due to a coronavirus pandemic. This situation translated also into a decrease in revenues from concession sales and advertising displayed in cinemas, as well as from the Group's film activity. The inflows from printing services were also lower.

Agora Group's advertising revenues grew faster than market expenditure on the promotion of products and services. They increased by over 3%, mainly due to higher inflows from the online advertising sales, especially in Yieldbird and radio businesses. Income from copy sales also increased slightly, which was due to the growing revenues from digital subscriptions of Gazeta Wyborcza, along with stable inflows of the Agora Publishing House. The number of subscriptions to Wyborcza.pl content at the end of March 2020 stood at 236.5 thou., which means an increase of over 34% as compared to the same period of 2019. The total digital inflows of the daily already reached PLN 11.2 million, which constitutes 30% of total Gazeta Wyborcza’s income. It is also worth mentioning the growing number of Premium TOK FM subscriptions purchased – 23 thou. at the end of March 2020. The increase in revenues from other sales in the period of January-March 2020 was mainly due to the higher inflows from the Group's food services activities, primarily due to the development of the Pasibus brand. The operating costs of the Agora Group in the 1Q2020 increased slightly and amounted to PLN 309.1 million. It is worth noting that the level of write-offs for assets had a significant impact on their level. In the corresponding period of 2019, the Group incurred costs of the restructuring provision, mainly related to the optimization of operations in the Print segment, which amounted to PLN 5.6 million. Without taking into account the negative impact of one-off events in the total amount of PLN 14.7 million, the operating costs of the Agora Group in 1Q2020 would be lower than a year ago.

D&A was the only growing cost category in the discussed period, while the Group recorded decreases in other items. The most important one - a decline in the costs of materials and energy consumed and the value of goods and materials sold - was mainly associated with the reduction in the scale of Group’s printing activity. This process also resulted in a decrease of the staff costs.

The Agora Group ended the 1Q2020 with an increase of EBITDA result to PLN 44.6 million. The loss at the EBIT level stood at PLN 19.5 million, and the net loss attributable to the shareholders of the parent entity was PLN 42.7 million2.

- After the outbreak of the COVID-19 pandemic, we focused on ensuring the safety of our employees and switching the organization to remote work model. We have also taken decisive steps to secure the Group financially. Now, along with the "defrosting" of subsequent sectors of the economy, we are implementing a plan to return to operational activity in a new reality. There are at least a few difficult quarters ahead of us, but I believe that the worst of them will end in June and we shall begin the process of rebuilding the Agora Group's results - comments Bartosz Hojka, President of the Management Board of Agora.

Already in March this year, Agora has started a series of measures aimed at minimizing the negative impact of a pandemic on the results of the entire Group. Most of the investment expenditure was suspended and almost all categories of operating costs were reduced. Agora also decided to optimize its investment project portfolio - to sell Domiporta Sp. z o.o., limit the scale of operations of Goldenline Sp. z o.o. and file for bankruptcy of Foodio Sp. z o.o. The company also verified the library of its paper publications and resigned from publication of two monthlies, as well as reduced the volume and number of copies of its daily. As part of savings measures, Agora also resigned from some of local offices, in which the work is currently carried out in the home office formula and will be continued in this form after the end of the pandemic. Additionally, the Management Board conducts intensified monitoring of the receivables inflow in order to safeguard the Group's financial liquidity. The company secured the financing of the Agora Group by the end of September and is working on its further extension. As part of cooperation with financial institutions, it secured a grace period for repayment of the loan that had been used so far. Both Agora and its subsidiaries also apply for available forms of public support for enterprises.

According to the Company's estimates, the effect of these activities will be savings of nearly PLN 185.0 million in 2Q and 3Q2020. Decisions on further actions will be tailored to current situation.

1  Without the impact of one-off events.

2 The loss of the Agora Group at the EBIT level excluding the impact of IFRS 16 amounted to PLN 18.4 million in 1Q2020 and the Group's EBITDA result increased to PLN 27.2 million.