Financial results of the Agora Group in 3Q2022 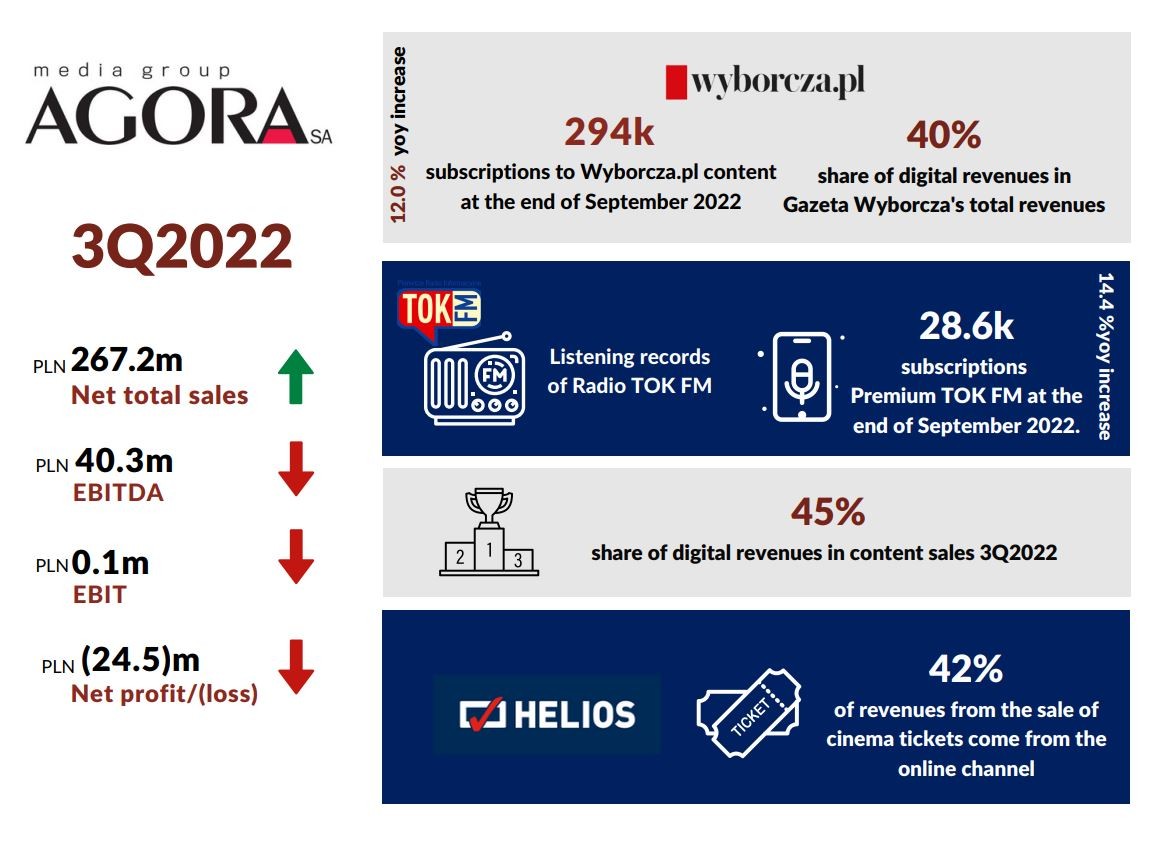 In 3Q2022, the Agora Group's results were pressured by deteriorating macroeconomic conditions and rising operating costs. Despite that, the Group maintained its previous level of revenues, primarily due to the recovery of income from its cinema business. Inflows of the Press and the Outdoor segments increased, and the Group's digital content sales revenues – from subscriptions to Wyborcza.pl and TOK FM Premium – also grew.

The Agora Group's total revenues in 3Q2022 amounted to PLN 267.2 million and were slightly higher than those recorded in July – September 2021. The largest impact on their level was due to an increase in the value of sales in the cinema business. Revenues from ticket sales to the Helios cinemas grew by more than 4% to PLN 47.9 million, and from concession sales by more than 5% to PLN 27.3 million. In the period under review, more than 2.4 million tickets were sold in Helios network – a level similar to 3Q2021. The total number of tickets sold in Polish cinemas in the discussed period stood at almost 11.3 million, rising nearly 11% yoy1. In addition, the Group's revenues from foodservice business increased due to higher inflows of Step Inside, which now operates 12 restaurants under the Pasibus brand, as well as revenues from film operations. NEXT FILM's own production – the film Johnny about the friendship between Rev. Jan Kaczkowski and Patryk Galewski, directed by Daniel Jaroszek – turned out to be an attendance success. Johnny, which premiered in September 2022, has already gathered more than 900,000 viewers in cinemas2. Inflows from other sales were also higher, mainly due to increased revenues from printing activities. However, growth in these categories was offset by lower advertising and copy sales.

Revenues from the sale of advertising services in the Group decreased by almost 5% to PLN 119.9 million. These inflows shrank the most in the Internet segment, due to lower revenues from the sale of advertising services by Yieldbird. Radio advertising sales also declined in the Radio segment. However, cinemas and the Outdoor recorded increases in advertising spending, while Press advertising revenues were at last year's levels. The share of digital and online revenues in the Agora Group's total advertising sales amounted to nearly 41%. On the other hand, the value of copy sales decreased by almost 7% to PLN 32.1 million. The main reason for this decline was lower income of Agora Publishing House and from the sale of traditional editions of Gazeta Wyborcza, with revenues from digital subscriptions to Wyborcza.pl increasing by nearly 5%. The number of active subscriptions to Wyborcza.pl at the end of September 2022 amounted to more than 293,900 – that’s 12% more than last year. The share of digital revenues in the Group's total inflows from copy sales accounted for more than 43%. In addition, the Agora Group also offers other content in digital form, including podcasts, and all digital content sales grow – in July-September 2022 its share already accounted for almost 45%. The number of TOK FM Premium subscriptions at the end of 3Q increased to 28,600, up more than 14% yoy. What is worth noting, as of the end of October, the number of TOK FM Premium subscriptions had already exceeded 30,000.

The Agora Group's net operating expenses in 3Q2022 amounted to PLN 267.1 million. Their increase of nearly 5% was mainly related to market conditions associated with general price increases, inflation and wage pressure. Operating expenses were higher in all segments except the Internet, growing the most in the Press segment. Traditionally, costs of external services were the largest item, while the highest increase was recorded in the staff costs, which grew in all business areas. At the end of September 2022, the Agora Group's employee headcount stood at 2,360 FTEs, up by 57 FTEs yoy. The Group's other expenses increased, with only marketing and promotion costs remaining at the previous year’s level.

It should be mentioned, that in 3Q2022, the redemption of part of the PFR loan in Helios had a positive impact on the level of net operating costs of the Agora Group, while the negative effect was attributed to the payment of a one-off allowance for employees and associates of the Group related to high inflation. In total, these events reduced Group’s costs by PLN 11.0 million. In 2021, the number of one-off events was smaller3.

Ultimately, in the period of July – September 2022, the Agora Group recorded a profit at the EBITDA level of PLN 40.3 million, and the Group's EBIT profit amounted to PLN 0.1 million – both ratios, however, were lower than in the previous year4. The Group's net loss stood at PLN 24.5 million, while the net loss attributable to the shareholders of the parent company was PLN 23.5 million.

According to Agora's estimates, in 3Q2022, the value of total advertising expenditure in Poland amounted to PLN 2.45 billion, increasing by 4% yoy. After analyzing the available data and observing market trends, Agora decided to keep its estimates of the dynamics of advertising spending in Poland in 2022 unchanged at approximately 3.0%-6.0%. Additionally, the company has decided to raise its expectations for the full-year rate growth of the value of outdoor advertising expenditure – due to the significantly faster-than-estimated dynamics of their recovery in the 1H and in the 3Q2022. Currently, Agora expects that in 2022 it may be at the level of 25%-30%, due to, among other things, sports events taking place at the end of the year, which traditionally cause more activity of advertisers on outdoor panels.

Taking care of all its businesses, the Agora Group analyzes their current condition taking into account the expected situation in a given market, as well as development plans. At the end of October 2022, the company's Management Board decided that it was necessary to take restructuring measures at Agora S.A., including group layoffs primarily in the Press segment. Moreover, on 14 November, the Management Board of Helios S.A. decided to introduce structural and organizational changes in the company and to reduce its staff. The planned restructuring measures are a response to macroeconomic conditions and increasing financial burdens, and at the same time shall prepare the organization for the coming months. In addition, all areas of the Group operate in strict cost discipline, simultaneously implementing numerous initiatives to offset the impact of cost spikes on their performance.

Data source: consolidated financial statements of the Agora Group for 3Q2022 according to IFRS.

1 Cinema attendance - Helios S.A. estimates, based on data from Boxoffice.pl acquired from film copy distributors and on the results of UIP distributor films obtained in multiplex networks.

2 Johnny - cinema attendance till early November 2022, NEXT FILM's own data.

4 Without taking into account the impact of IFRS 16 in 3Q2022, the Agora Group recorded an EBITDA profit of PLN 17.0 million and an EBIT loss of PLN 6.0 million.