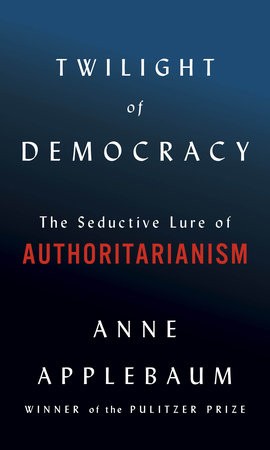 "Twilight of Democracy" - a new book by Anne Applebaum, which has just been published in the United States of America, arouses heated discussions and admiration. The award-winning historian of communism and researcher of contemporary politics focuses on the mechanisms of the emergence of autocracy and nationalism on the basis of modern democracies, while creating an analysis of the change that shocks today's world. The Polish publisher of the book will be the Agora Publishing House. Its premiere is scheduled for the beginning of 2021.

From the United States and Great Britain to continental Europe and beyond - liberal democracy is under the threat and authoritarianism is growing. In "Twilight of Democracy" Anne Applebaum - winner of the Pulitzer Prize for "The Gulag" (2004) and one of the first American journalists to raise the alarm about anti-democratic trends in the West, describes, i.a., what makes nationalism and autocracy attractive for the societies of the United States, Great Britain, Hungary, Poland and many other countries. Applebaum also shows how supporters of illiberalism in countries around the world use conspiracy theories, political polarization or social media to change their societies. Apart from that, the author tries to answer the question of how we can return to democratic values.

- Anne Applebaum is a leading historian of communism and a penetrating investigator of contemporary politics. Here she sets her sights on the big question, one with which she herself has been deeply engaged in both Europe and America: How did our democracy go wrong? This extraordinary document, written with urgency, intelligence, and understanding, is her answer - Timothy Snyder, author of "On Tyranny".

In the United States, "Twilight of Democracy" was released by Doubleday Publishing House on Tuesday, July 21 2020, and since then has been at the top of the US bookstore bestseller list. The Polish premiere of the title is planned for the beginning of next year - the publisher of the book will be the Agora Publishing House.

Agora has already published 3 other books by Anne Applebaum - "Red Hunger" and the reissues of "Gulag" and "Behind the Iron Curtain". Books in Polish are available for sale, i.a., on Kulturalnysklep.pl, as well as in the form of an e-book and audiobook on Publio.pl.