FINANCIAL RESULTS OF THE AGORA GROUP IN THE 4Q2019 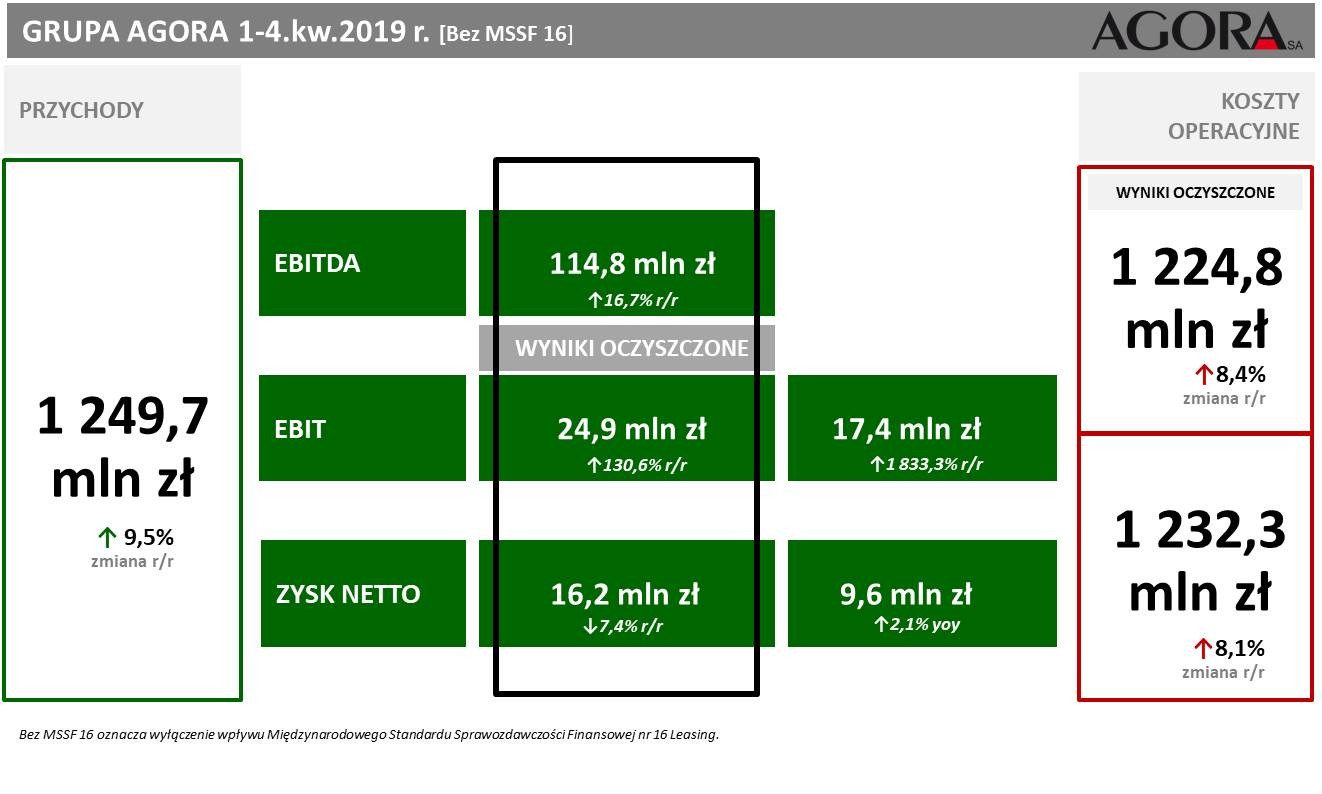 In the last quarter of 2019, the Agora Group again increased its revenues. Its advertising inflows grew significantly, especially in the internet and outdoor, as well as revenues from the copy sales. Cinema business also achieved great results thanks to the consistent expansion of the Helios network. The Agora Group ended 2019 not only with successes in the development of the premium offer and prospective acquisitions, but also with record income in Helios cinemas, film business, as well as Yieldbird and HRlink companies.

The results of the Agora Group in 4Q2019 were significantly impacted by the entry into force of IFRS 16. In order to maintain the comparability of data, this press release presents data without the impact of IFRS 16. More information on the effects of implementing IFRS by the Agora Group can be found in the financial statements for 4Q2019.

In 4Q2019, the total revenues of the Agora Group amounted to PLN 378.2 million and were higher by over 9% yoy. First and foremost, the advertising revenues of the Group increased - by nearly 14% to 187.9 million PLN due to an increase of this category noted in the Yieldbird company, the Outdoor segment - due to the development of the Premium Citylight and Digital offer (including panels of the Move TV platform purchased in July 2019) and the Movies and Books segment - mainly in the Helios cinema network. A drop in advertising revenues was recorded only by Press and Radio, respectively due to market trends and limited number of titles issued, as well as lower income from the sale of airtime at third party stations.

The revenues from the sale of cinema tickets in the Helios network in the amount of PLN 79.1 million were slightly lower yoy, while inflows from concession sales increased. In 4Q2019, according to Boxoffice.pl, nearly 4.3 million tickets were purchased in Helios multiplexes, which is almost the same as last year1.

In the last quarter of 2019, Agora's revenue from the copy sales also were higher, particularly income from the sales of the Agora Publishing House publications and subscriptions to Wyborcza.pl. At the end of 2019, the number of digital subscriptions of Gazeta Wyborcza stood at almost 218 thou. The Group also recorded higher inflows from other sales, mainly due to the rapidly growing food service activity, as well as a significant increase in revenues from film business, related to a greater number of new titles in the cinema distribution. Additionally, income from printing services decreased in the discussed period as a result of closing in mid-2019 2 out of 3 printing plants and a drop in the volume of orders.

The Agora Group's net operating costs in 4Q2019 increased by over 7% to PLN 355.1 million. Their growth, associated with development activities, was observed in segments with higher revenues – the Internet, the Movies and Books, as well as the Outdoor segment. On the other hand, operating expenses dropped in lower-impact businesses - in the Press (which also includes restructured printing activity of the Group since 3Q2019) and the Radio segments. The reductions were introduced for the sake of a positive result of these segments or in response to market trends. Thanks to such cost discipline, the Agora Group ensures the level of its operating results. In the whole 2019, the Group's operating costs were 8.1% higher and accounted for PLN 1,232.3 million.

Thanks to the results noted in 4Q20192, the Agora Group's profit at EBITDA level increased by 14.7% to PLN 54.5 million, and in 2019 was higher by 16.7% amounting to PLN 114.8 million. In both period the Group recorded also a profit at the EBIT level - in 4Q 2019 in the amount of PLN 23.1 million and in 2019 of PLN 17.4 million, as well as net profit - in the amount of PLN 12.2 million and PLN 9.6 million respectively. On the other hand, net profit attributable to the shareholders of the parent entity stood at PLN 11.5 million in the last quarter of 2019 and PLN 6.9 million in 20193. What is worth mentioning, 2019 was the best ever in terms of revenues and EBITDA result for the Helios cinema operations and Yieldbird company. HRlink and NEXT FILM also noted record-high inflows, while highest ever EBITDA profit was achieved by the Outdoor segment and Gazeta.pl division.

The Agora Group works intensively on the implementation of its strategic goals set for 2018-2022, in particular on accelerating the development and increasing the scale of its capital group. One of these activities, in February 2019, was the purchase of a 40% stake in Eurozet Sp. z o.o., the broadcaster of the second largest radio program in Poland, with a possibility of acquiring 100% shares if ot would turn out to be beneficial. In October 2019, Agora submitted an application to the President of the Office of Competition and Consumer Protection for permission to acquire the remaining 60% shares of Eurozet and is waiting for a decision in this matter. This transaction may change the position of the Agora Group on the radio market – it would be the largest media acquisition in the company's history. Agora also invested in 2019 in the B2B solutions segment, acquiring further shares in the Czech company ROI Hunter and becoming the majority shareholder of HRlink Sp. z o.o.

Other important development directions in the strategic perspective of the Agora Group are digitization and development of premium services and products. Thanks to the purchase of shares in Piano Group Sp. z o.o. operating the Move TV platform, AMS took another step in expansion of its portfolio of digital panels and services, as well as strengthened its position in the prospective DOOH market. The subscription offer is being further expanded by Gazeta Wyborcza and Radio TOK FM. At the end of 2019, the number of subscriptions to Wyborcza.pl reached nearly 218 thou. (up by almost 28% yoy), with the ARPU indicator amounting to PLN 14.4 (up by 37% yoy), and the share of digital revenues in all Gazeta Wyborcza inflows increased to 24.0%. At the same time, the Press segment is limiting its portfolio of paper issues5 – it reflects the intense development of the digital first approach and the focus on digitization in this area. The number of Premium TOK FM subscriptions sold also increased - at the end of December 2019 it exceeded 20,000. This is 20% more then in March 2019; over the past 2 years, the station’s subscriber base grew by 100%.

It is also worth mentioning that despite intensive development activities and acquisitions made by Agora in 2019, the company shared the profit with its shareholders – at the beginning of August last year Agora paid a dividend in the amount of nearly PLN 23.3 million.

5 In 2019, the Company decided to cease the regular publishing of the Opiekun and Kuchnia magazines.